How do I know if I should still buy keys in a round?

Take a look at the "Stats" page on the Fomo game UI. Purchasing keys are a bet on how high the volume of a particular Fomo3d round might go, since the game is entirely unpredictable and could end at any time, your job is to estimate just how greedy other players might be. The longer the round goes and the more keys purchased, the better for everyone (other than the final winner).

(Long version only) If you are worried that keys are too expensive, or will be too expensive for the round to continue, consider this: If there was 1 million ETH put into the round, 1% of all ETH in existence, the cost of each key would be just over 0.01ETH. This mode is called the "long con" for a reason, each round will last months.

How much can I expect to earn in Fomo3D?

Fomo3D constantly distributes Ethereum rewards to all players within the round. A portion of the ETH used to purchase keys is distributed to the players. You receive Ethereum rewards for every key that you purchased, so the more keys you own, the larger your share of the rewards. You can withdraw these rewards from your vault anytime.

What is the difference between P3D and F3D?

PoWH3D (P3D) is a cryptocurrency exchange and blockchain game where you receive passive Ethereum rewards for every buy, sell or trade of the P3D tokens based on the number of tokens you hold! P3D tokens act as the "House Token" for all current and future Team JUST projects.

FOMO3D (F3D) is an active blockchain game where you buy "keys" and then receive rewards from other players. When the timer reaches zero, the last buyer receives half the pot!

F3D and P3D are separate projects that were both built by Team JUST and F3D sends dividends to all P3D holders as well based on the teams chosen! For maximum dividends, we encourage you to try both! To get started with P3D, check out our P3D beginner's guide.

Absolutely not. F3D is played with ETH and does not require any P3D to play. However, all P3D holders benefit significantly, so we encourage you to become a holder.

How much do P3D holders benefit from Fomo3D?

How can I access the game if the main site goes down?

How does the ICO phase work? (Quick mode)

(Only relevant for the quick mode of the game) During the short ICO phase, all eth put in is pooled together and all players get the keys for the same price. At end of ICO, the total ETH collectively put in is pooled to do 1 big key buy. And then each player will receive a number of keys based on the % of the total ETH they invested during this phase.

Why do the keys increase in price?

Is the starting price of keys the same each round?

Yes, the initial starting price of keys in each ICO will always be the same. ETH in the pot carried over from the previous round does not affect the starting price.

What happens if a player buys a fraction of a key?

A player only becomes the leader ("takes control of the private keys") if they purchase 1+ new keys. Fractional keys will increase the player's share in the round as expected but will not have any other effect.

How can I sell my keys during a round?

You cannot sell your keys while a round is going on. Instead, the keys act as a share of the pot and are sold automatically when the round ends. The next question explains this in more detail.

When are the keys I purchased sold?

At the end of every round, a percentage of the ETH pot is distributed to all F3D players proportional to the number of keys they held in this round. The keys being "sold" refers to the ETH you will be paid based on the share of the keys you hold at the end of the round.

What exactly happens at the end of each round?

When the countdown timer reaches zero, the last person to buy a key before the timer ran out wins the displayed jackpot which is about half of all the eth collected during the round. The remainder of the pot is distributed to F3D key holders, P3D token holders, with a bit left over to carry over into the next round. The exact ratio by which the winning pot is split up depends on which team the winner selected during their final purchase. For more details, see the pot distribution section.

Can I switch teams within a round?

Yes! Every time you purchase a new key, you can select a new team to represent, replacing your previous allegiance.

Can I earn more rewards by strategically picking the right team?

When you purchase a key, all F3D players regardless of their team are paid out rewards based on their percentage (%) share of the total keys. For example, if a player has 10% of the keys, then they would receive ~10% of all rewards for F3D players. In this way, whether you are one team or another does not affect how much you earn in relation to other players on other teams.

However, the team you select does determine the percentage of your funds that go to other F3D players, to P3D holders, and to the pot. If you wanted to maximize the amount going to other F3D players (regardless of their team), you would select Team Snek or Team Bull.

Why would I buy multiple keys at once?

The more keys you purchase, the larger the "shares" you have in this game round. This means you will receive a higher percentage of dividends on every new key sale and a larger proportion of the pot after the round ends (even if you don't win!). In addition, the more keys you own, the more likely you are to receive the random airdrop of more keys.

If I buy a key while I am the leader, will the timer reset? (Quick mode)

(Only relevant for the quick mode of the game) Yes, even if you are the current private keys holder because you've purchased the last key, each time you buy an additional key the timer countdown will reset to 90 seconds.

Can I play through the TrustWallet mobile app?

Yes! The main site has been designed to be mobile-optimized and should work great from TrustWallet on your phone.

Why can I see 2 different timers during the ICOs?

The main timer shows how long there is left in this ICO. The smaller timer (which has a longer countdown) shows you how much time is left, minimum, before someone is able to exit scam. (i.e. the length of the ICO plus one round)

If I buy 2 vanity names, do I own them both?

How can I check if a vanity name is taken?

Check https://fomo3d.eu/ to see which names are taken, or you can also type ,jname "somenamehere" in the #bot-commands channel to check directly in discord.

Do I lose any money if I buy through a referral link?

No, the 10% referral bonus is at no additional cost to the player. Instead, 10% of the ETH you used to buy the keys is routed to the person that referred you. In the event that you did not use a referral link (and have never previously used one), that 10% is routed instead as dividends for P3D!

What do the different sections of the vault UI mean? 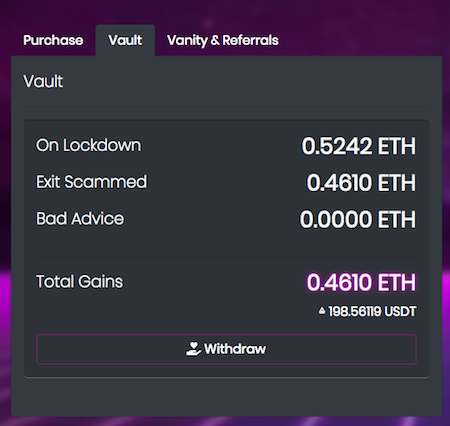 What is the community fund and how much is sent there?

3.5% of the Ethereum the final pot-winner would have otherwise gained, is instead sent over to a community bank contract, which pays out community members who make this game possible, like jogfera with the fantastic artwork, mcpump with his great statistics and cryptoknight who runs so many amazing articles and the wiki. The calculations occur both when keys are purchased, and when the final pot is distributed.

This fund is fully dynamic, and if you guys do cool things, and the developers or staff notice, you can be added to the payroll for the running of the Fomo3D game, that's pretty much how everyone gets there anyways.

What factors influence how much you make each round?

When factoring in how much each player makes, you have to factor in the following:

Multiply and factor in all of these possibilities and the potential outcomes are near infinite. (Credit to @inventor)

What is that big red button and should I press it?

Do not press the big red button and definitely don't check your P3D rewards after the transaction goes through. If you are a developer and might want to integrate the big red button into your Dapps, click here for more information. You can see the red button contract here.

Where can I learn to make cool distributed blockchain apps?

Anyone can learn if they are willing to put enough time and energy. Check out our introduction to Dapp development for a great starting point and links to resources.

Have a question not answered here? Please direct message @Cryptoknight on Discord with your question so we can add them here!